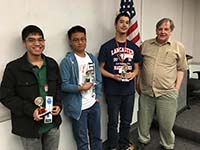 When the 36th annual Mathematics Field Day was over, students from Paraclete and Pete Knight high schools walked away with bragging rights for having the winning team scores in their respective categories. Retiring professor, Dr. Richard Sieger, has designed the last 28 annual tests of mathematics knowledge.

The Leap Frog Relay derives its name from the way in which team members are allowed to switch papers to resolve math problems.