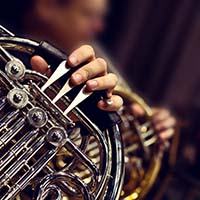 All AVC employees and members of the AV community are cordially invited to the upcoming concert by the Antelope Valley College Symphonic Band on Saturday, November 19 at 7 p.m. in the Performing Arts Theatre.

Frank Ticheli is Professor of Composition at the University of Southern California and has composed nearly 40 works for concert band. This performance will feature several of his greatest pieces for band or choir along with our special guests, the Sunday Night Singers, under the direction of Michael McCullough (Choral Director at Palmdale High School and AVC adjunct music faculty).

General admission tickets are $7. Tickets are available online at tickets.avc.edu, by phone at 661-722-6580, or at the PA Theatre box office. AVC Faculty may receive two hours of Professional Development, Standard Two for attending this event.

In addition to the Band concert, two Applied Music Recitals by our AVC music majors will take place during November - each with different performers. The first Recital is free and will be held in the Recital Hall of the Music building (FA3 162) at 7 p.m. on Friday, November 18.

The second Recital will take place on Tuesday, November 22 at 7 p.m. in the Performing Arts Theatre. General admission tickets are $7. Tickets are available online at tickets.avc.edu, by phone at 661-722-6580, or at the PA Theatre box office.