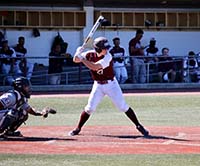 The Chicago Cubs selected Antelope Valley College catcher Wyatt Hendrie in the 10th Round of the MLB draft last night.

The 5'11 catcher from Paraclete High School also had a team-leading on-base percentage of .479 and a slugging average of .660. Hendrie was named Gold Glove Catcher and received All-Conference 2nd Team honors this past season in the Western State - East Conference.

Wyatt was most recently named to the 2019 ABCA/Rawlings Pacific Association Southern California All-Region Second Team and received a scholarship to San Diego State University. He will continue his dream to play in the major leagues, and now he's one step closer.